A large corrections campus, encompassing over 30 buildings in the southeast United States, houses approximately 5,000 inmates with separate jail facilities for men and women who are awaiting sentencing, serving sentenced jail time, and are in maximum security.

Correctional institutions require extremely reliable and robust security systems to ensure the safety and security of both personnel and inmates. The linear design of the jails at this facility requires inmates to be moved between locations – including cell blocks, meal areas, recreation and visitation – individually, in small groups, or via mass movement. The correctional facility’s 20 year old door control system was made up of outdated PLC controls and old relays with old wiring to control secure doors and mantraps. A massive upgrade was required to enhance and provide state-of-the-art security technology using high-quality, reliable door control systems. The unique challenge was to maintain maximum security during the technology system upgrade. Additionally, new maintenance policies and procedures needed to be implemented to sustain security and guarantee stability. 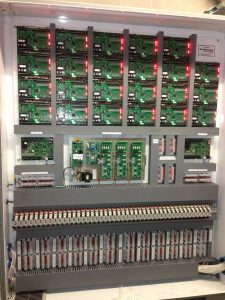 Over the past two years, Dortronics has been working with Next Level Security Systems (NLSS), which has been engineering and standardizing Dortronics System 4700 Series PLC Controllers for use across its base of correctional facility customers.  In tackling the project, NLSS partnered with systems integrator American Security Group (ASG) of Vista, CA, who is deploying the security logic controls and the NLSS Gateway product as part of a total technology update across the approximately 30 buildings that make up the correctional facility.

After considering risk-avoidance, the team chose solutions from Dortronics to ensure the highest level of security. The scope of the entire project calls for 4900 Dortronics PLC controllers to be installed to control more than 840 doors and 85 mantrap controls. The implementation is being conducted in stages and is on-going with completion of the project expected in 2015.

“We chose Dortronics due to their reliability in the industry. One thing was certain, we didn’t want to take any chances that may compromise security at a corrections facility,” said Bill Jacobs, President of NLSS, who is managing this project. “Mantraps are critical portals where controlled access can mean life or death, and the Dortronics 4700 series PLC Mantrap Controllers have proven themselves. “We’ve had no downtime at all.”

ASG has finished installation for two of the several systems scheduled for installation, the first of which required securing more than 30 doors, about a dozen of which were mantraps. The NLSS Gateway is used to control cell doors, with Dortronics mantrap controls incorporated to insure compliance with regard to interlocks.  The second system consisted of fewer total doors, but almost all of them were interlocked.

“The Dortronics controllers have been integral to ensuring compliance with regard to the correctional institution’s desire to maintain the highest level of security for interlocked doors,” continued Jacobs.

The correctional facility’s previous system was, as Anthony Sparks, General Manager for ASG calls it, “a hodgepodge of mismatched PLC controllers,” which fell far short of the state-of-the-art technology Dortronics offers. The disrepair of the system led to the decision to upgrade with the goal of standardizing across all buildings.

“The corrections campus had an aging system that was antiquated in many ways, and they were unable to get adequate service. Many of the installed components were either no longer manufactured or supported, or the manufacturers were no longer in business,” Sparks says.

By contrast, Sparks says Dortronics has been very responsive and helped ASG design a solution that met the facility’s requirement to have a spare controller on-site that could be easily swapped if necessary.  Because every building on campus is different, each system installation requires the Dortronics controllers to be custom programmed, which presented potential service issues. Working closely with Dortronics engineers, ASG devised a set of standards that could be implemented in the event of a component failure, which involve next-day turnaround for new PLC controllers that are pre-programmed for each building.

“This is a custom job, and Dortronics turned around the designs very rapidly, which was impressive – especially because in many cases, the design could change almost on an hourly basis,” Sparks said. “In addition, their ability to provide spares that are pre-programmed for specific building virtually overnight is an additional huge benefit.”

Another requirement for the new system was switchover capability that would allow the facility to alternate between new browser-based system control and traditional analog graphic display panel control as needed or desired. The combination of NLSS and Dortronics technologies allows on-site security staff to control the system locally using either method, while also allowing door control to be transferred to an off-site location via a browser in the event of an emergency.

“In the unlikely event of a riot or takeover, remote control of the system can disable local door controls, preventing unauthorized individuals from controlling doors on-site,” Sparks says. “This also ensures that at either software or analog control, mantraps and interlocks are able to function as intended.”

Since implementing the new systems, the correctional facility has seen a number of benefits, most notably increased safety and security.

“The immediate ROI is that security personnel know the mantraps operate in the manner they were designed to operate. They also know that there is no security risk based upon how the system protects the various areas from each other,” Sparks concluded. 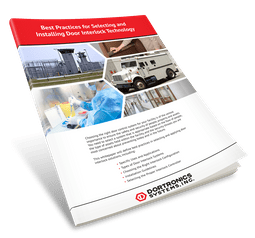